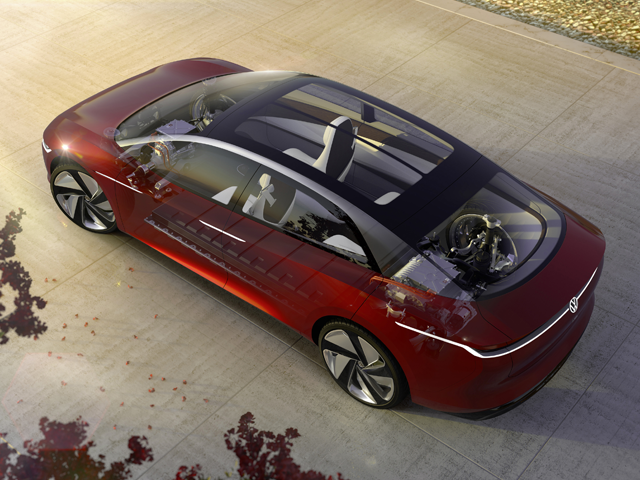 “When you look at the technical layout of a car today, then you have the engine somewhere, and that is already a pretty big block of metal. And with respect to e-vehicles, the entire matter of drive, electric engines and especially these batteries - that allows an architecture which is completely its own. Regarding the topic of handling and driving dynamics, the batteries have to go down into the floor, and in an ideal expansion stage it will only be the one floor, a flat floor with four wheels. The only thing still down there is the technology, and I can pretty much do what I want to on top of that”.

“As designers we naturally always talk about how one normally sees things. How one sees what a car is, or what a sporty car is”, continues Mauer. “That has resulted in certain formal archetypes being ‘burned into the brain’, so to speak. Based on the fact that we now have a lot more freedom, certain things will change to a greater degree than we have known up until now”.

“One example of this is the outer dimensions. How big the car is on the outside and how much room it offers inside”, explains Mauer. “The new Volkswagen I.D. has the overall outer dimensions of a Golf and the interior space of a Passat”.

“Then, of course, there’s also the matter of the controls becoming more and more intuitive. The topic of, say, gesture and voice control. There will be far fewer buttons and switches. What might appear to be skimpy at first is actually a reduction – there doesn’t need to be anything else. It will also take some time for people to get used to this”, concludes the Head of Volkswagen Group Design. “I really believe that, in the future, many customers will base their decision to buy a car on the possibilities the interior has to offer. The exterior, so to speak, is then what has to be ‘taken on as a by-product’. Nevertheless, as designers we will continue to pay attention to the exterior, but we will be able to design far more dynamically from the inside to the outside”.